Today marks a momentous moment--the day the slippers come out of the back of the closet and take up their cold-weather role as my feet's best friend.

Todd and I are slipper addicts. My addiction is less pathetic because I am addicted only to slippers, whereas Todd is addicted to gloves, slippers, coats, and hats. He strokes fleece jackets in stores with a longing look in his eye, and I have to step in and remind him that he has several already. I've had to perform glove interventions for the poor guy. He's a cold little dude.

My only cold body part is my feet, and today I was pattering around the house in my socks and for the first time in six months, the socks just didn't feel like quite enough.

Into the closet I dove for my navy blue Acorns.

I bought a pair of Acorn fleece moccasin slippers for Todd many moons ago...I think when we were still living in Idaho, where the cold floors were definitely colder. He wore them out, and so several years ago, I bought him a new pair, and bought myself a pair while I was at it, to replace my red fleece Eddie Bauer slippers that were in tatters.

The new pairs don't seem to have lasted as long as that first original pair did, but they've done a fine job anyway. We both like the moccasin style, so our feet are cradled in fleecy comfort and warmth.

Back when we were still livng in Columbus, we'd stop by Todd's sister's house, which is beautiful but cavernous and hard to heat, and we'd both have our trusty slippers under our arms. Our nephew Angelo was a toddler then, and on the rare occasion that one of us would show up without our slippers, he'd point to the front door where we kicked off our shoes and say, "Slipper? Slipper?" It's important to look cool for the kiddies.

Last winter I shoved my foot into my slippers and felt the lining tear under my toes. I was planning to try to eke another winter out of them, but after checking out the Acorn site while linking it just now, I'm thinking I may be in need of a spiffy new pair...they have some WAY nicer patterns now!

In another week or two, the flipflops will journey back to their cold-weather storage and then the transition to fall will be complete.
Posted by Janelle at 11:45 PM 1 comment:


I was making the turn into our neighborhood this week when it struck me that it was a really similar day to the day (bright, sunny, autumnal) I came into the neighborhood for the first time with our realtors and saw what would become our house. In fact, it's been almost a year, which is unbelievable.

So I thought I'd show what we've done to the outside of our house, which may or may not look like much once I have the pictures set up. Here's how the house looked the first time I saw it in November: 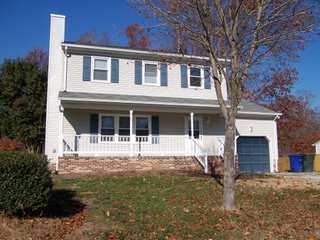 The first thing we did, in March, was add shrubs across the front. These were freebies from a friend, hence the irregular sizes. 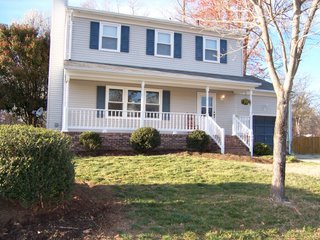 In April, we added a low stone wall to demarcate the front flowerbed. What we've had to do is build landscaping basically from scratch, as the previous owners (the "plant-haters," as they're known) had ripped out all the trees, shrubs and plants for reasons known only to themselves. We also filled the bed with a couple truckloads of composted soil. 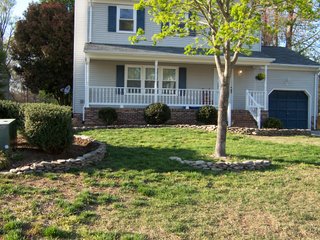 In May and June, I slowly added some herbs and perennials to the flowerbeds. This has been the most trying part for me, because I have no idea what I'm doing, or what will do well and what won't. Bright annuals seem like the obvious choice to fill the beds, but as the front of the house is the only section that gets any substantial amount of sun, I decided to make the bed my herb garden, supplemented with perennials, and then filled in with annuals.

Being timid about spending vast sums of money, I didn't fill in the beds nearly as much as I should/could have, but I'm just writing off 2006 as a learning year. Hopefully, in these pictures I took yesterday, you can see how the beds have filled in a little. Most of the plants struggled through July and August, and didn't really start to thrive until the weather cooled off in September. 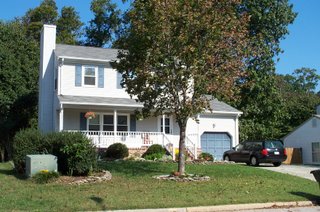 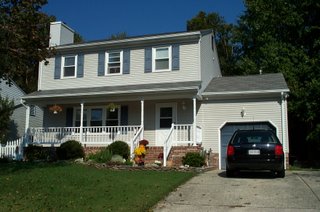 Since the only gardening I've done is in pots, planning gardens and beds for a bare canvas this size is fairly daunting to me, especially since plants are such a money gamble. I'm afraid I take it personally when they turn up their toes and die on me!

Next spring I'm hoping my German neighbor with the super-green thumb will repeat her offer of plants from her garden...I was just not ready to start planting when she was thinning out her gardens in March.

Once the weather cools, I'm going to throw in some bulbs and pray the squirrels don't feast on them...and I may splurge on a few flowering shrubs to plant along the treeline in back.

My plans for next year are to keep adding plants to the front, until I have a really full jumble of all different sorts of things. English garden-style is what I'm going for. And then I'll take on the backyard, which is an even more daunting task!

The next major cosmetic change to the front needs to be updated paint on the shutters, door, and garage door--all of which are looking mighty faded from 20 years of southern sunshine. I'm thinking navy blue would look crisp; right now it's all an 80's style country blue which is not only faded but seriously out-of-date. Painting the garage door will be a stopgap until we're ready to replace it with a nice new door--sorely needed.