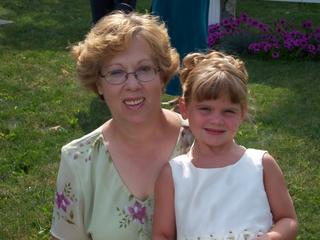 I never got a chance to post more stuff about my trip home to Ohio two weeks ago, so here's a few more pictures from the wedding:

On the right, my lovely mom and her lovely granddaughter. Mom sewed Kylie's flower girl dress, and also made the flower girl basket and ringbearer pillow. Mom is a talented seamstress: in 1992, she made my wedding gown, three bridesmaid's gowns, and then whipped up a little something for herself to wear. That was her most ambitious undertaking, but she has also done a lot of sewing for the grandkids. When I was little, she sewed most of my clothes, and often made my doll a matching outfit. Nice memory! 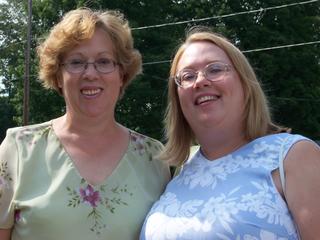 On the left, my lovely mother again, along with yours truly. All of my outdoor wedding pictures have light poles, telephone poles, and telephone wires running through everyone's heads...some creative photo editing will be required when I scrap these!

I was thrilled to find this dress at 30% off at the last minute--summer dresses are mostly gone from the stores, but this one fit well and was fairly flattering as well as cool. 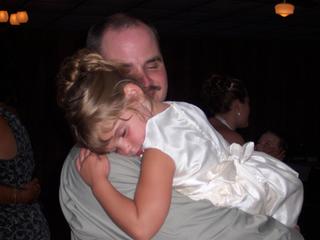 This was a sweet moment--the last dance at the wedding reception, and Kylie was exhausted after a very long and important day. Her daddy took her out for one last dance...precious!

I wish I had a picture of my slow dance with Tanner...the music started and he was on the floor and motioned for me to come dance with him. The song was "I Will Love You So For Always"--who sang that one, anyway? DeBarge? It was a glorious 80's ballad, that's all I remember. Anyway, I sang some of it to him while we danced, and he was quiet for a minute and then said, "That's the stupidest song I've ever heard." Well, that's romance for ya, kid. At least, that's how we did it back in my day. 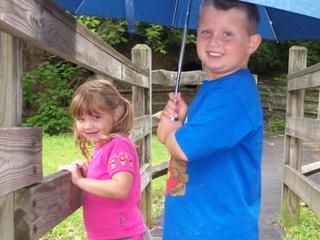 One day while I was home, I took Tanner and Kylie for the day and started them off with a treasure hunt. I hid small prizes and clues in five or six different places around the area, and they had a super time finding them all. This shot is from a walk we took in the rain at one of the parks where I hid stuff. The following picture is right after they discovered a prize in the big flowering vine at my parents' house. 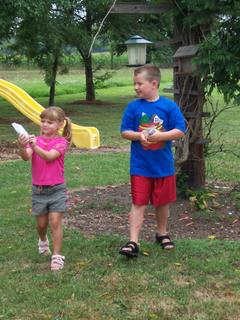 I never seem to take as many pictures as I intend to, but as the pile of photos "to be scrapped" grows, I realize I don't need to take as many as I think I do. I wish I had gotten one of my grandparents, but other than that I did pretty well. I did get one of myself with Grandma at the wedding.

In other news, my cold is finally on its way out after 10 days and counting. I'm still coughing and hoarse, but the spark of life is starting to come back, LOL. I got my Stamp It! project sent out via Express Mail this morning, and on my day off tomorrow I plan to turn my attention to a few other things that are cluttering up my desk. After that, time to create a couple September classes.

We've been glued to the coverage of Hurricane Katrina since Sunday afternoon, when the situation was looking positively apocalyptic. It's still terrible and awful, but it sounds like the very worst-case scenario for New Orleans was averted at least. Poor Biloxi, though.

Hurricanes were never something I paid much attention to until we were introduced to Isabel in 2003--our very first hurricane experience, mere months after we moved to the coast. That was enough of a taste for me, and we got off very light with just the inconvenience of no electricity for five days. Others in our area weren't as lucky. Now they've started talking about this tropical depression 13 in the Atlantic, and I am wondering if we're going to get another taste this year. For some reason, I have a feeling we'll see a hurricane here this season. Hope I'm wrong!