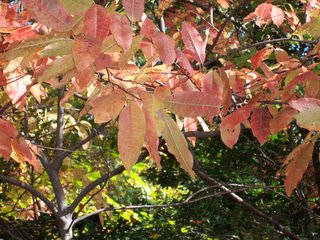 That's a Phoebe quote from Friends, by the way...for some reason, Todd and I have been quoting it for, oh, ten years now. It's just fun to say.

A few fall foliage pictures from our Sunday drive along the Colonial Parkway. This is a limited-access tourist road that connects Yorktown, Williamsburg and Jamestown, and runs along some of the prettiest rivers and streams you'll ever see. 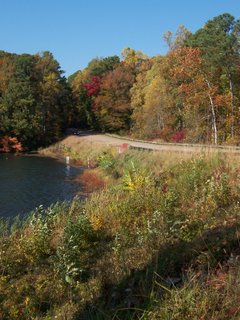 I think this one on the left is sooo pretty. Love all the grasses and weedy stuff in the foreground.

This one below was taken in roughly the same spot as the other one, just facing the opposite direction. 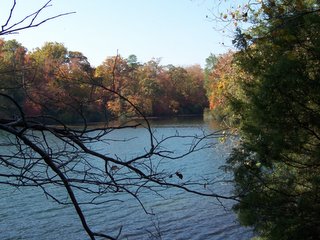 That's all for now--Todd wants his dinner for some dumb reason. Heh.


Someday it will dawn on me that ingesting caffeine after 4 pm guarantees a jittery sleepless night. But I guess I'm a slow learner.

I had wonderful iced tea with dinner tonight...what a dope. Saturday night, I had wonderful coffee with dinner...you'd think the lesson would have lingered in my tiny brain a little longer. It's 1:45 and I am sleepy yet agitated. My brain's all jumpy.

So I thought I'd write what my SBF girlfriends call a "ketchup post."

Store news: I am so eager to quit my job. However--

My friend Cheryl is taking over as manager, and there will be a desperate need for several part-timers. Much as I'd like to drop a lighted match on the carpet and run away from that place forever...I am needed. At least for a couple afternoons a week. And since I know I will miss that paycheck, miniscule as it will be, I think I am stuck there for the forseeable future.

But No Teaching and No Weekends. On this there can be no compromise!

Designing news: I finished 14 cards for the Paper Crafts book I was asked to contribute to. Last week I had to make some last-minute changes, type up all the supply lists and instructions and mail them off. It was a panicky day or two, but oh, what a relief to drop them in the bin at the post office.

Consequently, I am finding it hard to get enthused about creating anything for the latest magazine call that entered my e-mail inbox a few weeks ago. It's for an issue I've had a lot of luck with in the past, but I am having a hard time forcing myself to sit and stamp. What I have come up with has been less than good.

However, I discovered a new company that has no design team that I'm aware of, and that I would like to work for. So tonight I directed my energy to making a layout with their stuff. I'd like to make three or four layouts, plus a couple cards, and toss them out to see if I can get a bite. The first layout went together well...I haven't scrapped a page in EONS.

Life news: We're slowly making our way through Season 1 of Gilmore Girls on DVD. I'm completely amused by how much Todd likes it. Because it's a fairly girly show. But we just fast forward through that dreadful Carole King theme song, and try to ignore the super-girly "da-da-da" vocal snippets that get played during scene changes. I'm soooo not a chick-flick kind of woman, but this is a good show. The acting and writing are excellent, and it pulls you right in. Definitely in the same vein as Ed and Northern Exposure, but with female protagonists, which is a mighty refreshing change. 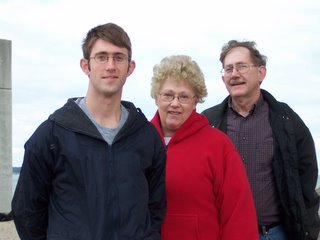 My aunt, uncle and cousin came down for a day visit last weekend, and we took them up to Yorktown for lunch, walked along the river and nearly froze to death, and walked through the town, which was only slightly less cold. My cousin Alan lives in Charlottesville, which is about two hours away from us, so John and Molly decided to drive on out to us during their weekend visit to Alan. 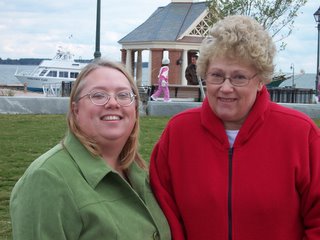 It was such a great little visit...we appreciated them making the trip!

We went to a Halloween party/poker game that Saturday night at our friends Dawn and Dave's house. I am feeling such a desire to entertain. We just have no room in this condo to have a party. Having two or three people over is pushing it. One of my many regrets about losing that house in September was that it was laid out perfectly for entertaining. Ah well. Maybe I'm just not ever meant to break out of my "I hate people" persona.

This past weekend we drove up the Colonial Parkway to Williamsburg to look at the fall foliage, which really started looking glorious about a week ago. I had made a rush trip to Williamsburg on Thursday and I wanted to go back when I had time and a camera to get some shots of the leaves. I'd upload the pictures right now, but Todd has hidden his digital camera somewhere, and I can't find it. Maybe tomorrow.

I'm really not sure how I'm feeling about life right now. I seem to veer wildly between quite cranky and fairly mellow. It's a fun ride. *eye roll*

I still feel like I need that breathing room and I'm not getting it. Cheryl started at the store today and I was showing her the ropes and talking through some of the issues with her, and I am so sick of devoting precious brain power to that place. I desperately want to turn it all over to someone else and walk out the door and never come back. The problems are big...I've been unable to do anything about them...and now I simply don't care. But Cheryl does and she needs my help, at least for a while. Ugh. I can't believe I'm sitting here in the wee hours thinking about that store. Double ugh. It's sucking the life out of me!
Posted by Janelle at 5:15 AM 4 comments: