I've been blog-pouting ever since Thursday afternoon, when I spent twenty minutes writing a post, hit "publish" and it vanished into thin cyberspace. But I guess I'm over it now. I guess. Sorta.

I was trying to post these pictures of my scraproom, which was not struck by a tornado, even though it looks like it. 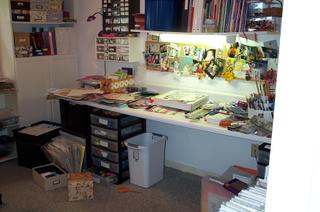 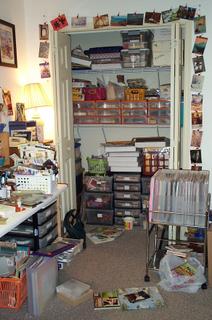 It looks much better at the moment, after I got fed up and started throwing clutter into boxes and baskets. It's a surface solution, but hey, I'm okay with that.

I can't look at pictures of perfect scraprooms on Two Peas or wherever...the ones with the gorgeous paint jobs, the coordinating office furniture, the tasteful art on the walls. My walls are filled up with shelves and bulletin boards, although I do have a Georgia O'Keefe flower poster that looks like the top half of a vulva. (However, if one's vulva was indeed blue and purple, one would have some serious gynecological issues to look into.)

Anyway, I can't paint the walls, we live in a rental. The furniture is a mishmash, and so are all my storage systems and containers. But I consider myself pretty lucky to have a room of my own, even if it's bursting at the seams and way too hot in the summer.

I have been reading like a maniac. On my day off Thursday, I stopped by a used bookstore in Newport News that I've been meaning to check out for two years, and I walked out with a big bagful of books. It was a heavenly feeling--I was really scrounging for reading material in the spring, and I'm putting some effort into finding something new instead of re-reading all my oldies over and over.

I picked up three historical mysteries by P.B. Ryan that are some of the best mysteries I've read in a long time, almost as good as Barbara Hambly's Ben January mysteries. For some reason, the mystery writers I actually care to read have dwindled down to a tiny group. Mysteries were the only fiction I was willing to read for years, and I read just about everybody, but so many of the authors took their characters in weird directions, or just kind of petered out and got boring, so it's been really hard to keep myself supplied.

Anyway, the first book is called Still Life with Murder. I plowed through all three books in less than two days, which was dumb, but I couldn't help myself. The main character is an Irishwoman who becomes a governess for an upper-crust Boston family in the late 1860's. I was afraid these would be "cozy" mysteries, with a prudish governess-type character, but they are much more hard-bitten than I expected, and the character of Nell is quite complex.

Our air conditioner is on the fritz, which makes sense since we are in the hottest, wettest week of the year right now. Fortunately, our bedroom is equipped with a separate AC unit, because the previous owner was a computer tech for the county and had all his computers in there. (I'm having deja view, I think I explained that before.) Anyway, we can blow cold air out of our bedroom to the rest of the upstairs with fans, and downstairs isn't too bad if you sit in the living room right under the ceiling fan. The AC guy will be able to get the necessary part on Monday, so hopefully we can be cool soon.

Tomorrow, I think I'm going to drop by Barnes and Noble on my way to work and see if I can score the new Harry Potter book, and maybe squeeze in a visit to Target and look at all the cool new school stuff I hear is now in the dollar spot. LOVE the dollar spot!

Off to read in my nice cool bed.