Todd had a very happy afternoon today...he got to go striper fishing on his co-worker Dave's boat. A few weeks ago, some of the office guys played hooky on a Wednesday afternoon, and had a super day. Alas, Todd decided to be responsible that day, stayed at work, and had to listen to phone call after phone call detailing the massive stripers the guys were hauling in. He was quite woebegone by the time he got home that night!

So the next time Dave took his boat out for an afternoon trip, Todd had to go along. Alas, the stripers were all off shopping and having their nails done that day...not a bite to be had.

Today was just right. The guys hauled in huge fish all afternoon and evening. How huge? Take a look! 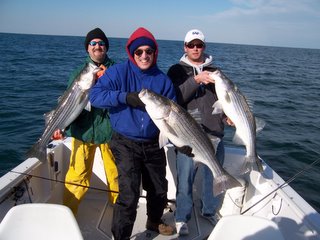 That's Todd in the middle with the big smile on his face, Dave on the left, Aaron on the right. Usually when Todd goes striper fishing, he never gets good photos for one reason or another, but this time he got me some fun ones to scrap! 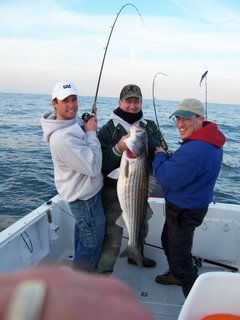 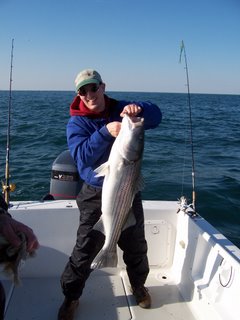 It looks like such a warm heavenly day out on the ocean, but somehow I don't think it was. January and February are prime time for striped bass as they meet and greet each other in the bay and out in the ocean. Unfortunately, those also happen to be the coldest months here in Virginia. But it looks like the guys stayed warm lifting fish!
Posted by Janelle at 11:01 PM 2 comments: