On kits and messes

I work 25-30 hours a week in a small scrapbook store in Newport News, and on my unexpected day off yesterday, I sat down with a few products I pulled on Sunday to make some more displays for the store. We got in some fun family-themed papers from Flair Designs last week, and those will be fun to play with, but most of my layout and card displays are set up to try to sell product that has been sitting around the store for months. Sometimes people just need to be reminded that this stuff is there and that it can be appealing to use.

But the kit I pulled to use yesterday—oy. We have a whole stack of these things; they’re kits from Deluxe Designs/Two Busy Moms in a variety of themes, and they have just been sitting in the store until I am sick of the sight of them. They are monochromatic kits and contain 6 sheets of double-sided cardstock, tags, a frame, mini tags, mini squares, alphabet stickers, etc. The idea is that you can make up to 6 scrapbook pages with each kit. I pulled the birthday kit to make samples with…it’s done in shades of dark blues. Now, there’s not a thing wrong with these kits, the quality is nice, the designs are bold and graphic, and the tags and sayings and stickers are nicely-designed, but people just don't get what to do with them. And I’m having a hard time jazzing them up. Anyway, here's a sample of what I came up with. (below)

But I am determined that, if I can get a couple of pages and a couple of cards up on the wall, with the kits underneath, so that the customers can see exactly what’s inside these kits and what they can do with them, maybe they’ll buy them and I won’t have to move them around the store anymore. Wish me luck.

On a semi-related note, I am SO SICK of the mess my photos have become. I’ve got film photos in boxes, digital photos on the computer in a million different files, and then my sister and sisters-in-law send me pics of the various kiddies, which I admire and then promptly lose. I know for a fact I have some cute shots of Anna and Evelyn that came in a few months ago, but not a clue where I stuck them. I just recently unearthed some pictures of Tanner and Kylie that my sister sent me a year ago. For five years, I was an organized scrapper—some might even say an anal-retentive scrapper—albums relatively up-to-date, negatives neatly organized, photos neatly filed. Then we moved to , and I finally embraced digital photography, and life generally got busier and messier, and there went my wonderful organization that I used to pat myself on the back for. And every day I get farther behind. I may have to forget ever producing anything publishable again, and just concentrate on getting the damn things scrapped.

Ugh. Time for some tea and a novel, enough of the scraproom mess for this afternoon.
Posted by Janelle at 5:46 PM No comments: 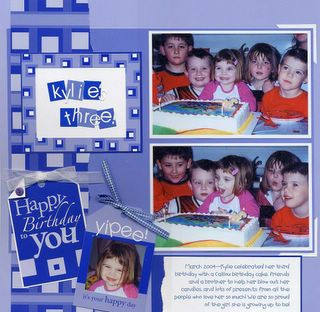 Posted by Janelle at 4:35 PM No comments:

I had to make a brief trip to last week, and I discovered something I hadn’t realized before: airports are fun. Usually when I fly, I am rushing from one end of the airport to the other to catch my connecting flight, but this time both my layovers, coming and going, were a nice pleasant 60-90 minutes: time enough to grab a bite (those three pretzels I was offered on the plane didn’t quite fill me up) and meander to my gate, peeking into stores along the way. It was the most fun part of the trip.

My layover was in Minneapolis on the way out, and I was ridiculously thrilled to be in the state that claims Garrison Keillor, Al Franken, James Lileks, and all those knucklenuts on MST3K. Funny people are always from . Or . I didn’t meet any comics at the airport, but the cute, slightly nerdy guy at the Starbucks stand definitely had potential. And oh, the temptation of the Minnesota-themed gift shop! I came *thisclose* to buying a Paul Bunyan shot glass, but resisted somehow. Everything was so exotic—it was from !

Coming home, I changed planes in , which was a real big-city airport, with a soaring ceiling, expensive shops, and lots of groups of people speaking various non-English languages. Coming from the rural American boonies, I’m always slightly startled by this phenomenon—there are languages other than English? (Yes, I know I’m a rube: excited by and amazed at hearing Japanese spoken.) I loved the shops—I can’t imagine how people keep from blowing huge chunks of money at airport shops. There’s something so devil-may-care about flying anyway, so why not go all the way and blow out on a $150 backpack? (No, I didn’t, but I came close.)

...now if I can just figure out how to get some pictures up, I'll be set.

It is a beautiful cool night here in VA. My in-laws are here for the weekend, and I can hear spoons clinking against bowls down in the kitchen, which means that DH and his dad are having another helping of strawberry shortcake. I came across some beautiful fresh-picked strawberries at the deli where we ate lunch yesterday...expensive, but so worth it. I baked up a pound cake yesterday afternoon, got some french vanilla ice cream, and deliciousness abounded. Tonight we're eating up the rest of it.

The pound cake is the recipe my mom always used for shortcake, straight from the Betty Crocker cookbook she received as a gift when she and my dad were married in 1969. I found a duplicate at a used bookstore five or six years ago, and it was such a pleasure to look at all the pictures I used to pore over as a child. That cookbook also contains the roll-out sugar cookie recipe that we used for every holiday when I was a child. The pound cake tasted like home.

Is this thing on?

My very first blog post...I feel like such a sheep. Who really wants to know what I think, anyway? I guess I'm about to find out.
Posted by Janelle at 11:04 PM 1 comment: 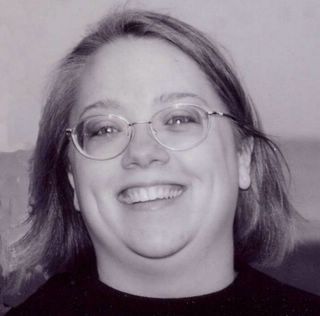 Posted by Janelle at 9:56 PM No comments: